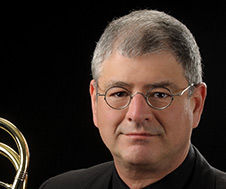 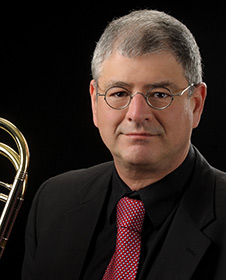 David Ritt grew up on long Island, New York. He began studying the trombone at age 9, fatefully inspired by its resemblance to his toy slide whistle.

David attended the Eastman School of Music in Rochester, New York. He studied with Donald Knaub of the Rochester Philharmonic, Byron McCulloh of the Pittsburgh Symphony Orchestra, Cherry Beauregard (on euphonium), and John Marcellus, former Principal Trombone of the National Symphony Orchestra. He received his Bachelor of Music in Trombone Performance in 1979. While at Eastman, David participated in the Orchestra and Wind Ensemble as well as several of the Jazz ensembles and improv and arranging classes. He also played in various Salsa bands in Rochester.

David joined the Singapore Symphony in 1978 and later played in the Fort Wayne Philharmonic in Indiana. He studied with Frank Crisafulli of the Chicago Symphony Orchestra before joining the Seattle Symphony and the Seattle Opera as Principal Trombone, in 1981. He moved to Second Trombone in 2004, an entirely different job, and a welcome change after 23 years as Principal.

David has played Bass Trumpet for Seattle Opera’s Wagner Ring cycle since 1982, a specialty which has also taken him on several occasions to New York’s Metropolitan Opera.