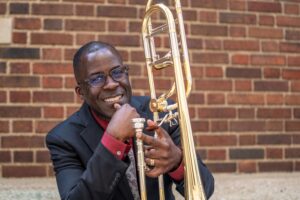 Kenneth Thompkins was appointed Principal Trombone of the Detroit Symphony Orchestra by Neeme Järvi.   Prior to this appointment, he held positions in the Buffalo Philharmonic and the Florida Orchestra and performed with the New World Symphony under the direction of Michael Tilson Thomas.  As a former participant in the Detroit Symphony’s African American Fellowship Program, he has been a mentor to several Orchestra Fellows over the years.

Thompkins has been invited to perform and conduct master classes at many music schools, including the Curtis Institute of Music, Mannes College, the University of Michigan, and Interlochen Arts Academy.   An active chamber musician, Thompkins performs frequently in recital and is a member of Detroit Chamber Winds & Strings.  Thompkins has performed concertos with both the Detroit Symphony Orchestra and New World Symphony.