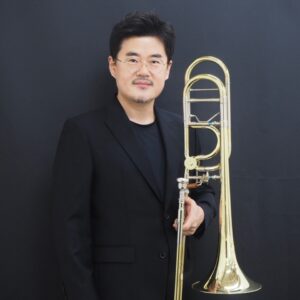 Young-Jin Seo received the Busan Mayor’s Award after winning first place in the Trombone section of the 14th Busan Music Competition, and began to attract attention as a promising young trombone player at the time. Early on in his career, this led to opportunities to perform with Busan Philharmonic Orchestra, the Seoul Art Symphony Orchestra, the Korea National Police Orchestra, the Republic of Korea Army Headquarters Military Band, and the JUMMA Wind Orchestra.

After graduating from Kyungwon University’s College of Music, he received a master’s degree from the Graduate School of Korea National University of Arts and served as a member of the Gangnam Symphony Orchestra. Following that, he travelled to the United States and was selected as the first Korean to receive a full scholarship for wind music at the State University of New York, graduating with an Artist Diploma.

After studying abroad in the United States, he performed more extensively and was invited to Carnegie Hall, Verizon Hall, Merkin Hall, Purchase Hall, and The International Trombone Festival to perform solo and chamber music. He was also a principal member of the New Jersey Philharmonic & Purchase Symphony Orchestra.

After returning to Korea, he was active as a senior member of the Eurasian Philharmonic Orchestra, the Ultrombone Ensemble, and the Art Brass Quintet.  In his role as an adjunct professor at Sangmyung University and visiting professor at Gachon University, he raised his status as a conductor of major practical skills, chamber music, and wind ensemble. The following year, he received the Outstanding Leadership Award from the Korea Arts Evaluation Committee.

He is making a new musical leap through conducting activities in The K Wind Orchestra, Cuivres Brass Band, and Virtuoso Trombone Ensemble.

Because of his many accomplishments, Seo has been appointed as a judge of Korea’s representative Dong-A Music Competition, Busan Music Competition, and Jeju International Brass Competition where is he helps to discover the next generation of talent. He is working as the secretary general of the Wind Orchestra Association in Korea.