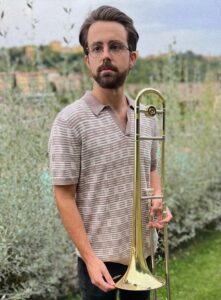 At the age of 32, Raymond James Mason has quickly established himself as a versatile, in-demand studio musician as well as one of the world’s top call trombonists in the ever-demanding field of pop music horn section work.

Ray enjoys an active career performing on Live TV. Highlights include the 2020 Super Bowl LIV Halftime Show with Jennifer Lopez and Shakira, The Academy Awards with Eminem in 2020 and as tenor/bass trombonist of the orchestra in 2022, Saturday Night Live with Bruno Mars and Mark Ronson, The GRAMMY Awards with Nas, and the CMA Awards with Earth, Wind, and Fire and Lady A.

Ray’s soundtrack performance credits include the Amazon Prime Sports Theme, The Boys Season 3, The Get Down on Netflix, and upcoming releases for Disney+, Hulu, HBO Max, AppleTV+, and Electronic Arts.

Ray has composed music for NBC, Tiffany & Co, Kiehl’s, and other international brands. His playing can be heard in ads for Nike, Facebook, Taco Bell, Garnier, Skippy, Guinness, and on streaming TV such as Marvel’s “Captain America and The Winter Soldier” on Disney+, “Suits” on USA, HBO Max’s “Made For Love”, and the theme song for HBO’s “Barry”.

As a member of Brooklyn afrobeat ensemble Antibalas, Ray was GRAMMY nominated for Best Global Music Album in 2020.

His work with Antibalas and its famed horn section has brought him to major festivals around the world and led to performances with My Morning Jacket, Brittany Howard, The Roots, Dr. John, the String Cheese Incident, Angelique Kidjo, Arcade Fire, and Bill Withers’ final on stage appearance at Carnegie Hall.

As a graduate of NYU, Ray set out to learn from the leading professional trombonists in a variety of disciplines and studied with Tom Hutchinson, Mark Patterson, Robin Eubanks, Alan Ferber, and Elliot Mason, as well as additional lessons with Marshall Gilkes, David Langlitz, and Brian Mahany. Additional mentorship by SNL Bandleader and original Tower of Power saxophonist Lenny Pickett, GRAMMY award winning composer, educator, and trumpet player Brian Lynch, and Director of NYU Jazz Dave Pietro provided Ray with the tools necessary to approach all musical scenarios in the 21st century.